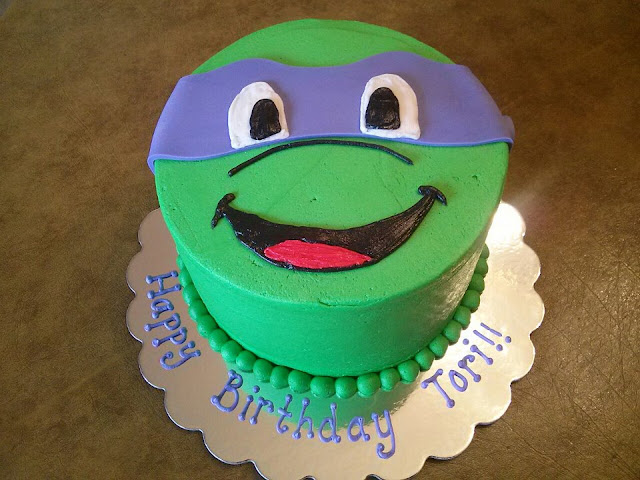 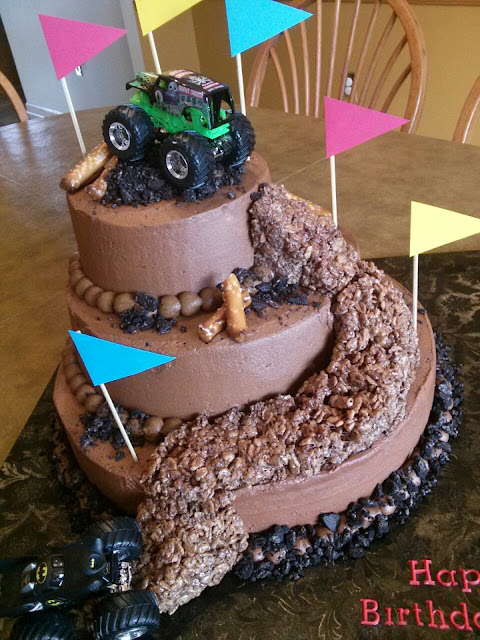 First birthdays are so special, aren't they?   What a great time to gather friends and family and celebrate your baby's first year of life!

My friend went all out in planning for her little one's 1st birthday party.  She had a lady bug theme, and went crazy with decorations, games, food, etc.  What a blast!

I had the pleasure of making the cake, cookies, and a cute little smash cake for sweet Mary. 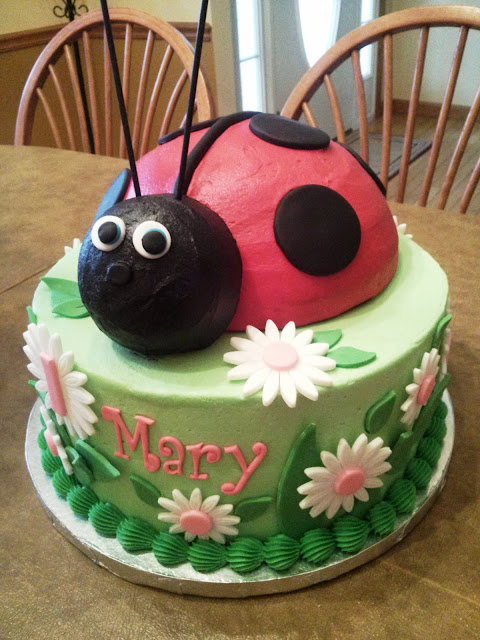 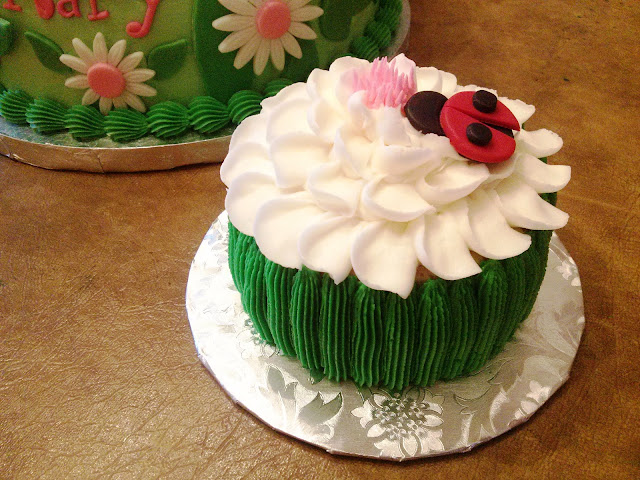 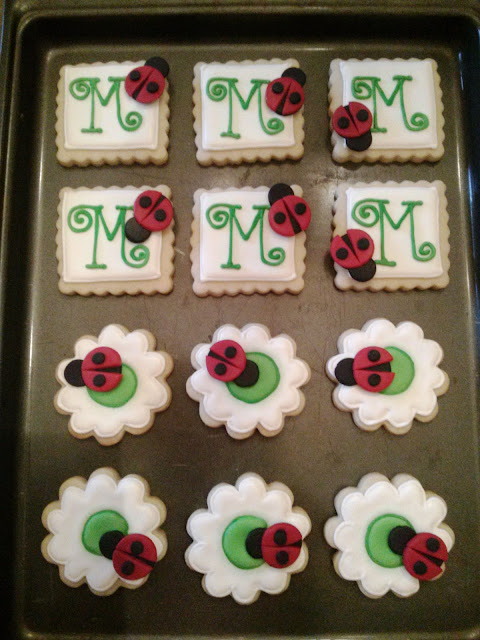 One of our local news stations has a neat program.  Their meteorologist visits local elementary schools and teaches the kids about various weather-related topics.  As a thank-you, the school makes a "weather cake" for the staff at the weather station.  Later that evening, during the weather segment of the local news, the weather program and school are highlighted, with video clips from the day's fun activities.   AND, the cake that was given to the weather station is shown!  My cake was on t.v!    That's a first for me.  :)

I love homemade cinnamon buns, and this recipe is excellent.  What makes it even better is that you roll the dough into one huge bun!   Slice it into wedges and share it with friends.  Or your kids, because undoubtedly if they see you baking this, they'll want some too. 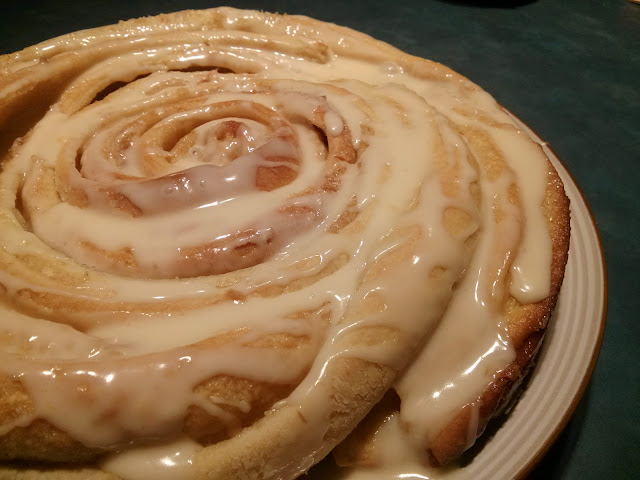 Sprinkle yeast over warm water and set aside for 5-10 minutes until foamy.  In a small saucepan, heat together milk, sugar, and butter until butter is melted.  Set aside to cool slightly, until warm to the touch.  Whisk together yeast and water mixture, milk mixture, and eggs.  Add salt, cinnamon, and flour.  Stir until combined, then knead for about 5 minutes on a well-floured work surface until dough is smooth.  Alternately, knead in stand mixer with dough attachment on low for 5 minutes.   Place dough in a large buttered bowl, cover with plastic wrap, and set in a warm place to rise for an hour to an hour and a half, or until doubled in size.

Lightly flour your work surface, and roll the dough to a 10 x 15 inch rectangle.  Spread the softened butter over the dough.  In a small bowl, stir together brown sugar, white sugar, orange zest, and salt.  Sprinkle sugar mixture over the dough.  Roll up the dough from the long side.  Pinch seam and roll so seam is down.

With a sharp knife slice the roll lengthwise.   Coil up one of the strips of dough, doing your best to keep the layers of dough together.  Continue with the second strip of dough, creating a giant coiled cinnamon bun.

Prepare a 10 inch springform pan, a 10 inch cakepan, or a round pizza pan or stone with nonstick baking spray.  Using a spatula (or two!), transfer the cinnamon bun to the baking pan.  Cover loosely with plastic wrap and let rise in a warm place for 1 hour.

Preheat oven to 350 degrees.  Remove plastic wrap and bake cinnamon bun for 25 to 30 minutes or until golden brown.

In a small bowl, whisk together powdered sugar, orange juice, and vanilla to make a smooth glaze.  Pour over warm cinnamon bun.  Cool a little while before slicing. 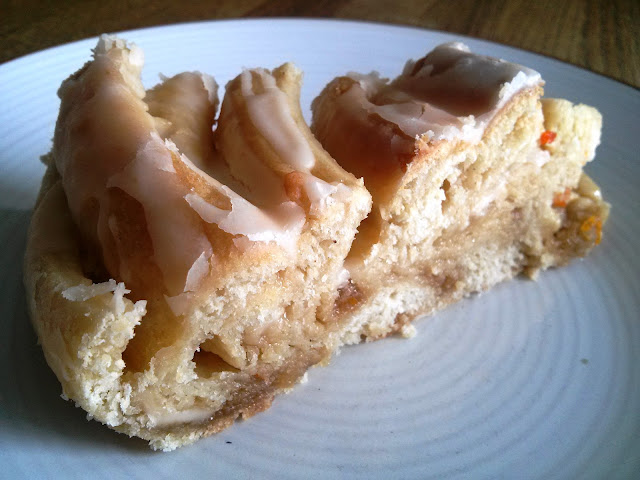 Dawn
I'm a busy mom to four kiddos, ages 14, 13, 11, and 9. I love to bake! I have been decorating cakes for friends and family for about 12 years now, and would love to share my creations with you! Not only do I enjoy decorating cakes, but I love to decorate cookies and cupcakes, plus bake all sorts of wonderful treats! Thanks for visiting! 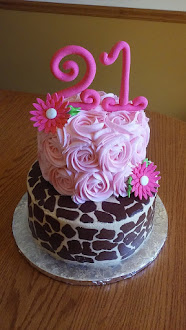 Search Simply Sweet for a recipe!

Some of the blogs I visit regularly